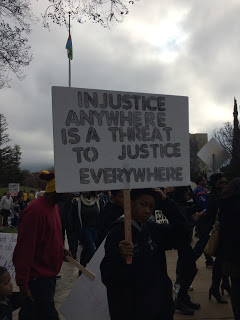 Yesterday was Martin Luther King Jr’s birthday and like many cities across the nation, Fresno had a gathering. I attended this gathering with my family and I have the following thoughts:

1. This rally and march was a celebration of Dr. King’s life and a chance for a community to come together to mourn his loss and to check in regarding how much progress has been made since his death. The man was a hero, a legend, and totally merits the acclaim he receives. There is no doubt about that. HOWEVER, a fair number of groups attended yesterday’s event under the banners of causes tangentially related to Dr. King’s work. Of course climate change matters (and it affects African American /Latino communities and the poor disproportionately). Of course migrant farmers have rights that are being trampled on. Of course undocumented workers are at higher risk of being brutalized. Of course woman should have access to birth control. These causes (and others like them) matter. But yesterday was about Black Lives (and how they Matter) and these groups should have stayed more in the background… or better yet put down their signs and join the march in true solidarity.

2. Actually, the “other causes” issue was like a micro chasm for the Black Lives Matters vs All Lives Matters fight that is (stupidly) still continuing. But more on that later.

3. There were a lot of speeches. Mostly by local big wigs and mostly centering around ideas of unity, coming together, honoring the ideals of Dr. King, etc They were mostly good if a bit long.

4. Worst Speech: Pat Brown (if I have that right), from the Clinton campaign. Her speech was the most pandering. She talked about people who had known Dr. King, people who had been alive when Dr. King was alive… and how these people (only “one degree of separation from Dr. King!”) were all endorsing Hillary Clinton. Which… is nice… but not really relevant at this sort of gathering. Don’t get me wrong, I understand why a political campaign would send a delegate to motivate people to vote in an election… but the whole thing felt sour. She even brought up some children roped into holding a Clinton sign to stand in front of her during her speech. Tacky. AND.. and I know this is quibbling now… but she referenced the “GLB” community… which leaves off the “T”… and I’m sorry but both the HRC and Mrs HRC don’t have the best track record with the Transgender community so to leave them off like that was a pretty big misstep in my opinion. 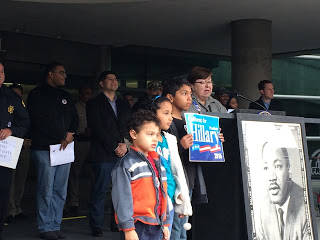 6. Best speech: Councilman Oliver Baines. This man knows how to speak to a crowd and his message was vital. He started off by saying how Dr. King made people uncomfortable with his activism and that he, Oliver Baines, was going to make us a little uncomfy too. Because, he went on, it is fine to celebrate the life of Dr. King… but the truth can be disconcerting. And the truth is that a lot of us aren’t doing anything. What are you doing, he asked the crowd, when Trump makes his statements full of hate and bigotry? (And then he compared Trump to the KK which was… awesome). What are you doing, he asked us, when unarmed black boys are killed? I filmed the 2nd half of his speech because no recap here can do it justice… (sorry for not getting the Trump / KKK part). There is a protester who starts yelling… I *think* it was about cops killing people but he really gets going when Mr. Baines starts talking about standing up for the LGBT population (Calling out churches that spew hate!!). Thank you Mr. Baines. 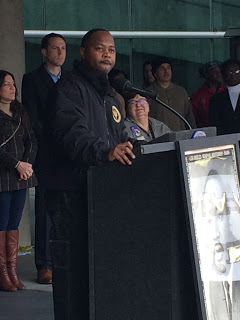