Me: Look at my stupid funger, it is all swollen and gross.
Matt: What happened?
Me: I don’t know. I had a hangnail and I bumped it, not sure what was first but it is super tender and driving me crazy.
Matt: That looks infected. you should call your doctor.
Me: I don’t want to,
Matt: But you should.

On the phone with my grandmother discussing her cough and hoarse voice.

The irony not lost on me, I sent a message to my doctor via email.

This sounds odd, I know that I had a hangnail and now my finger is all swollen, very tender to the touch, warm to the touch, and bright red with a little white next to the nail. It is making it very hard to type, and as a writer, that is kind of a big deal…

I figured it would go away on its own but it has been a few days and my husband is freakng me out by insisting that it is infected. I promised him I would email you. The pic is blury but it sort of shows what Iam talking about.

I included a blury photo of my finger.
Less than two hours later she wrote back.

Your finger does look infected. The picture is blurry but I think there may be a pocket of pus which we may need to open and let out. It would be good to come in. In the meantime I’ve sent antibiotics for your to pick up and take.

I hate when he’s right.

The good news is that he can get my perscription for me.

The bad news is I get to go have my finger drained on Tuesday.

The even better news is that Ella gets to come with me.

BUT, being the optimist I am, I’m going to use thiis as a learning tool… she can watch me have this done and then get my flu shot and learn that boo-boos happen, that doctors help us, and that everyone gets shots but live and recover quickly.

At least that is what I am telling myself. 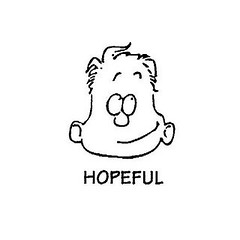 Did I mention it is the middle finger?