Why is this show making it so hard to like it?

What we know from the get go: space, adventure, teen, The CW.

What we can posit: sci-fi, teen angst, plot contrivances, pretty people, the need for suspension of disbelief.

Then we watch the 5 minute preview on Hulu.

And we get excited. Very excited. The first five minutes gives us exposition (handled well –quick, succinct gives we what we need to know and moves on). It gives us a heroine who is strong, feisty, and likeable. It gives us some cool space shots of space stations and other such things. In other words, there is a good budget on this, that bodes well. It gives us a peek at some of the coming drama, but it seems tempered by the story. So far so good.

Then we watch the whole first episode.

Teen angst means unrequited love, someone being dramatic for no other reason than being dramatic, the line “you just don’t understand!” and a pretty girl getting mostly naked.

What else can we expect? Well, I am going to predict a stereotypical villain doing something villainy, adults looking stupid, and hints to a bigger story arc, and probably the death of a somewhat central character fairly soon to show us how edgy and stuff the show is.

That check list is now a mass of checks and stars and underlines.

Here’s the central plot: The humans destroyed their planet almost a hundred years ago and the survivors have been living in the Ark space station. All crimes are given the same weight (wha…?) and prisoners are judged on their 18th birthday. For some reason, the powers that be decide to jeteson 100 teen prisoners down to Earth with no supplies but equipped with wristbands that let the Ark monitor their vitals in order to determine if the air is safe down there. During the landing, the communications between the teens and the Ark are destroyed.

Here’s the thing. Some of the acting is good. Some of the storylines are decent. But there is a fair bit of WTF and that makes it very hard to concentrate on anything else.

The good: The show has potential. Especially up there on the Ark, a few things happened that made me wonder what the background was. I could see the introduced villain turning out to not be the villain (hopeful eyes) because he really isn’t all that evil. At least not yet. What a switch that would be! 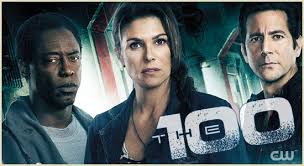 More good: despite hitting everything on my checklist the teens down there are interesting. The show on the ground is more Lord of the Flies meets Lost, but that isn’t necessarily a bad thing.

The bad: We do not understand the motivations of some main characters who are doing colossally stupid things. Over and over and over again. Who needs food, lets just hang out and play with the trees. Who need water, lets take off our clothes and have knife fights! Also? That check list thing is pretty annoying. We shouldn’t be able to predict the entire first episode. Also? All the teens look like they are 16 and 17. (It was established that they aren’t 18.) So. In a space station that regulates the breeding of the population and is all scrappy and hardly making do, there were a hundred 16 and 17 year old criminals? That’s… mighty specific and really really tough to swallow. 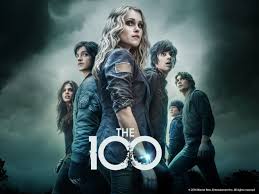 Fingers crossed the show finds itself and makes it work. We need better sci-fi on TV.

Post Script. I watched the second episode. Let me just say, the good is slipping and the bad is getting worse. I got a head ache from all the eye rolling. So far? No problems have been fixed… but a whole lot of more crazy you have to just ignore it if you want to stay sane stuff has happened.