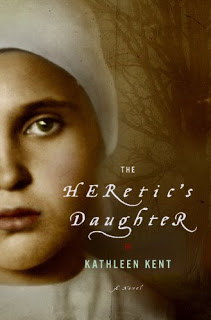 Told as a recollection of the past by one of the children who is not only imprisoned during the Salem Witch Trials, but whose mother is one of the condemned, this book does everything it can to pull you in, bind you to the main character Sarah, and mark you for life.

The subject matter of the Salem Witch Trials is handled with a mix of reality and vague instances of women with some sort of “specialness” but the end result is the same. You know how it is going to end before you even begin and for this reason I must admit that I put off reading it for several weeks. One cannot read this book without feeling overcome with frustration and anger at the judges and accusers.

If it was simple that and nothing more, I would have been justified in my hesitation and this review would be scathing… but Kent’s saving grace is that she went beyond the bones of the story to add symbolism and an attempt to make the trials in some way resonate with today’s readers.

In a broad sense it is good to be reminded (especially in this day and age) that the “justice” systems of the past were anything but. In a more specific sense, the book illuminates the struggle between the generations, class, family ties loyalties, and maturity. In these areas, Kent shines. The sense of alienation between Sarah and her mother her anger, and later her overwhelming sadness are very real, very powerful, and very universal.

The prose is at times simple and childlike (which makes sense as it is written as the recollections of a young girl being recounted from the safety of old age) an at times flowery and poetic. The story itself is told well, but it is the trappings of society and the journey of Sarah as daughter learning to value her mother even as it is too late that make this book worth reading.

To be perfectly honest, I hate the cover art for this book. The “Sarah” pictured appears more sullen and sort of “I am attempting to appear woeful” than actually sympathetic or sad. The inner cover of my copy had a great shadowy picture of a tree which I actually liked a lot, but… who am I?