August 26 (Today!) is designated in the United States as Women’s Equality Day. Instituted by Rep. Bella Abzug and first established in 1971, the date commemorates the passage of the 19th Amendment, the Woman Suffrage Amendment to the U.S. Constitution, which gave U.S. women full voting rights in 1920.

Women won the vote in the United States through a constitutional amendment, finally ratified in 1920. But along the road to winning the vote, states and localities gave the right to vote to women within their jurisdictions. This list documents many of those milestones in winning the vote for American women. 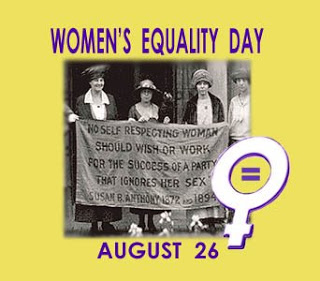 1776: New Jersey gives the vote to women owning more than $250. Later the state reconsidered and women were no longer allowed to vote.

1861: Kansas enters the Union; the new state gives its women the right to vote in local school elections.

1893: The male electorate in Colorado votes “yes” on woman suffrage.

1920: On August 26, a constitutional amendment is adopted when Tennessee ratifies it, granting full woman suffrage in all states of the United States.

But there is more to women’s rights than voting… a few things to keep in mind:

·The U.S. has no guaranteed medical leave for childbirth; we’re trailing 168 countries in the company of only Lesotho, Liberia, Papua New Guinea and Swaziland.

·The U.S. is near the bottom of the list — again — in our public support for quality childcare for children of working parents.

·Women only make up 16% of our representatives in Congress.

So, we still have work to do… but today let’s celebrate that women can and do vote in this country.

And… as a fun tie in… I just wrote for a book review for a dating guide women called Screw Cupid.

The book was a disapointment… and like the rest of this blog post, it reminded me that women have made strides… we just have a bit further to go.